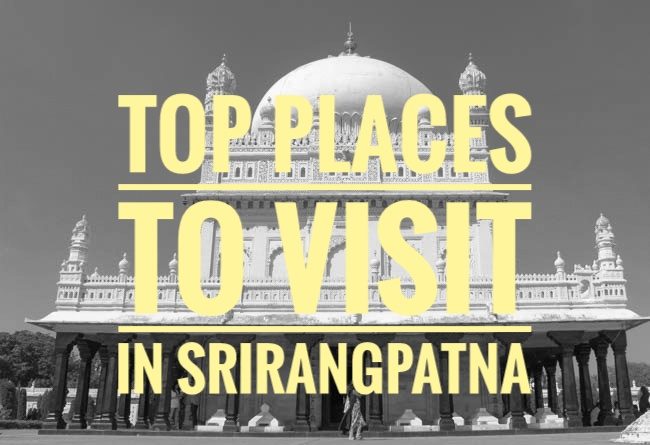 I had read and heard many stories of Tipu Sultan during my primary schooling. As far as I know; he was one of the fieriest ruler of his time. The town of Srirangapatna was capital of Mysore under his ruling. If we fast forward time today, Srirangapatna is prominent place for religious and historic importance. Due to its close proximity to Mysore, Srirangpatna tourist places are famous for a day trip.

The Sriranpatna is surrounded by Cauvery river that forms a river island.The Banglore-Mysore highway bisects this island into two.This small town still holds remnants of the bygone era and all monuments are well maintained by ASI. In this blog I am sharing Places to visit in Srirangpatna.

Before arriving at any place, I do little bit research about places I would like to visit. But in case of Sriranagpatna, I didn’t had much clue that there are so many places to visit in this small town. We reached Mysore by Noon from Coorg, checked into our hotel and later after quick lunch started for Mysore bus stand which was a mere 10 minutes walk from our hotel. After reaching to the bus stand we inquired about the buses and thereafter started our journey towards Sriranagpatna sightseeing.

As we got off from the bus at Sriranagpatna, we walked pass through street vendors and started walking towards one of the gate known as Banglore gate in the heart of the town.The town has other entrance gates namely Water,Delhi,Elephant and Mysore gate. These gates are entrances to the fort from different sides.

The town was earlier enclosed as Srirangapatna fort which dates back to 15th century.Earlier it was built as mud fort and then during ruling of Mysore Wodeyar king it was rebuilt. It eventually came under Tipu Sultan; during his rule major changes were made to the fort. It was then developed as a prime defense base from where Tipu Sultan with his army had launched attack on British Army.

As we crossed the gate, first we saw Jami Masjid in bright yellow color. As we were about to decide from where to start with; one auto rickshaw came towards us and asked for sightseeing. We made conversations about the places and he explained about the tour.We then decided to tour around in auto. Here is list of Top Places to visit in Srirangapatna in a half day:

First we went to river side island, and crossed the Banglore Mysore highway. Across the highway, first stop was Gumbaz.

Gumbaz is basically mausoleum of Tipu Sultan and his family. Tipu Sultan,his father Hyder ali and his mother are buried here. It was built by Tipu Sultan to house the graves of his parents. The British allowed Tipu Sultan to be buried here after his death.In fact, there are many other tombs of his family members and relatives surrounding the Gumbaz.

On the first glimpse, the Gumbaz looks built in Persian style architecture.The structure is supported by black stand stone pillars and large dome (gumbaz) stands on it.The tomb has intricately carved windows and stands on white elevated platform.The three graves of Tipu Sultan,his father Hyder Ali and his mother Fakr-Un-Nisa are located inside the mausoleum.

The walls inside are painted with tiger stripes as Tip Sultan was called as Tiger of Mysore.Next to Gumbaz is Masjid-E-Aksa which was built by Tipu Sultan and has magnificent architecture.

Next stop was Sangam- where rivers Cauvery Loakpavani and Hemvaticonfluences as Cauvery river.The place has significant religious importance as taking dip in the water is considered as sacred with a small temple at the Ghats. You can see coracles to take you on the other side.There were many pilgrims performing pooja,vendors selling eatables and other stuffs and it was like mini picnic spot for locals.

But most importantly I was very disappointed by the trash at the banks of Cauvery left by visitors.The place is so serene in fact as cauvery seems so flourishing and gorgeous here.

Daria Daulat Bagh- Tipu Sultan’s Summer Palace is set amidst beautiful gardens.It was built in 1784 and he ruled Mysore from here in 18th century.Now a days this palace is preserved as museum. The palace is built in the Indo-Saracenic style mostly made of teakwood. It is built on raised platform with open corridors and wooden pillars.

The main attraction of the palace is beautiful frescoes that adorns open available spaces like walls,pillars,arches etc. The outer walls of the palace have frescoes of the battle scenes,sultan’s noble causes and portraits. This can give you glimpse of European frescoes. The wooden ceilings of the palace are canvas painted with floral patterns.

It also houses a collection of Tipu memorabilia, European paintings and Persian manuscripts. The museum has the famous painting “Storming of Srirangapattanam” an oil painting by Sir Robert Ker Porter made in 1800. This historical painting depicts the final fall of Srirangapatana on 4 May 1799.  This place gives glimpse into the life of Tipu Sultan, the wars he fought and fall of empire of Srirangapatna. The Srirangpatna Palace is famous tourist places in Sriranpatna.

Note: DSLR Photography is prohibited inside the Palace.You can click pictures with your Phone.

After visiting the Palace, next we went to Death Place of Tipu Sultan. When British Army breached the Srirangpatna fort at watergate, Tipu himself rushed to the spot to fight.This spot marks the location where Tipu’s body was found after he was killed by British soldier’s bullets. In recognition of Tipu, Colonel Wellesley set a stone tablet to mark this spot.

As you walk further ahead of Sultan’s death place, you will come across Dungeon on the banks of river cauvery. Many British prisoners including Bailey were chained to stone slabs on the walls and imprisoned here.

The Dungeon has many symmetrical arches.The dungeon is completely underground and only flat playground can be seen from far away.You can see flourishing cauvery through the fort walls. It is one of the prime srirangpatna attractions among travelers.

As you walk past the road near to Dungeon, you can see tall Gopuram of Rangnathaswamy temple.As you reach near to the temple, you can find many stalls selling flowers,prasadam offerings,food etc. As like other south Indian temples, this temple also has tall Gopuram with beautiful architecture.It is built with the blend of Hoysala and Vijaynagara empire architecture. The temple houses Vishnu as main diety in reclining position on the coils of snacks.The temple is one of the top Places to visit in Srirangpatna as Pilgrims and tourists.

Our last stop of the tour was Jami Masjid. The brightly yellow mosque was built by Tipu Sultan in 1784 and known as Masjid-e-Alha. The mosque is not only a religiously significant shrine but has equally prominent historical significance. It is said that this is the mosque where the first imamat (prayer) was performed by Tipu Sultan himself.

The mosque has impressive looking towers and two predominant minarets that are built on high platform. The walls and ceilings of Jama Masjid have intricate carvings. A religious school[Madrasa] is also located within the compound of the mosque. The women are allowed inside the mosque and can climb the minarets too.

Other Srirangpatna Places to Visit:

Srirangapatna is 23 Kms from Mysore.You can easily reach Sriranpatna by Local bus from Mysore Bus stand. The town is small and you can explore by auto in a half day. If you are traveling from Bangalore, you may come across Srirangpatna before Mysore. 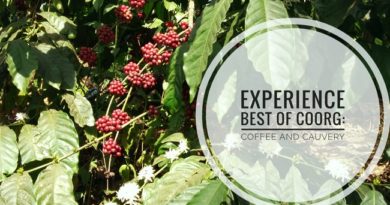 Places to Visit in Coorg in 2 days: Of Coffee and Cauvery

Places to Visit in Mysore in 2 Days: Complete Travel Guide